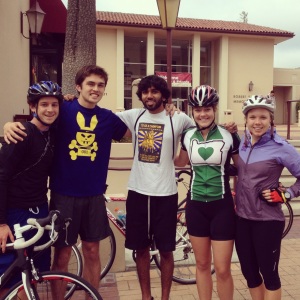 So today’s adventure began as one of those items on my bucket list.  My friend, Louise, and I had talked about exploring Northern California, biking, biking to Santa Cruz, and biking to San Francisco.  Now it was time to move “biking to San Francisco” from an idea to a reality.  No more of this “oh, we should do this, do that” and then have it never happen.  No, we sent an email to TriClub (Triathlon) and put it on the calendar.  Want to know something funny about our club?  We have almost 200 on the email list and I’m positive the same 5-8 people show up to practice.  Well, these lovely folks below were willing to take the plunge. 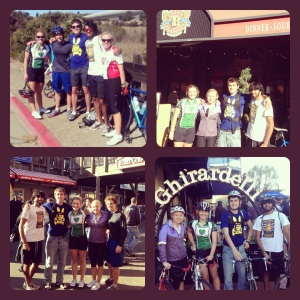 Somehow Louise and I believed that we could accomplish this in less than 4ish hours.  If we left by 10:45, we could even hit Pier 39 by 2:45 at the latest.  Sooooo not true.  We did meet around 9:45 but didn’t end up leaving until 10:10.  Jordan, this year’s president (who happened to finish the Nike Women’s Marathon in 2nd place…for his first marathon) kept telling us otherwise. We actually reached the city (after a few detours) by 3:30 and ultimately got back to school around 6:45.

Biking along roads with excessive stoplights is a pain in the you-know-what.  However, this must have been the most gorgeous day of fall yet, so it was totally worth it.  What else would I have been doing?  What do you think a good deal of my school is doing? Sitting in their rooms fooling around on the computer and television.

It was perfect weather the entire way through Palo Alto and even into the city.  We did hit some patches of wind, but other than that, sunny and warm all day long.   We did have one little detour 15 miles in with a flat tire, then another flat tire with 15 miles to go.  Really, it was our luck.  Luckily Louise knew how to change tires or that situation would have been interesting.  The last time I had a flat, I walked home and took it to a bike shop.  The funny part about Louise’s flat tire was that it was around 2:50 and she commented that we wouldn’t be home until really late.  I assured her we wouldn’t.  Then her tire went out.  Oops 🙂

As for directions, we attempted to use Google Maps, but Google doesn’t see it necessary to provide extensive biking routes.  Hm, maybe if they did, more people would start biking places.  Ok, that’s a stretch, but maybe? 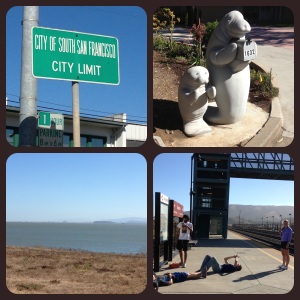 There were certainly some GORGEOUS areas in which we biked.  I was worried that if we had too large of a group, there would be expectations.  So, it worked in our favor that there were only 5 of us, all willing to take an adventure. Plus, we were sort of “winging” the whole experience. After Louise’s went out, Jordan suggested taking the CalTrain to SF (only about 9 miles, but boy they would have been loooooooong 9 miles), which we did.  Probably the best decision we had yet and that’s the happiest I have ever been to see the CalTrain.  Note, it is about 3:15 by this point.  To say we were hungry might be an understatement.  I know it seems I am always eating, but remember I am dealing with three college boys, who never stop eating and it had been a long ride so far. 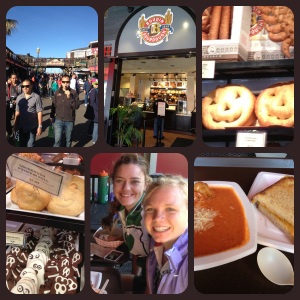 Of COURSE when we are in the city we have to have Boudin bread! We hopped off the train, biked down the Embarcadero and fought our way through Pier 39 to Boudin Bread.  Sure, there is a larger factory store a few blocks down, but we were hungry. 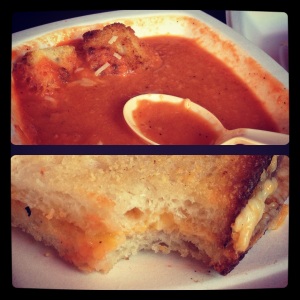 Now I finally understand why everyone pairs grilled cheese with tomato soup.  It’s pure GENIUS!  Warm soup, hot cheese melted over two chewy slices of sourdough bread.  It was great.  Bread … Chocolate.  That’s a logical transition, don’t you agree?  Since Ghiradelli’s, another San Francisco classic, was only a mile away, we decided to check it out.  Per usual, the line was out the door, so ordering ice cream, a shake, or sundae was completely out of the question. It didn’t mean that we couldn’t pick up a free sample, right?  My luck seemed to continue and it was a seasonal (or new?) PUMPKIN SPICE FLAVOR with a dash of caramel on the inside.  You could totally pick up on the pumpkin essence. I almost wanted to change outfits (take off my jacket and helmet) and go in for another, but decided one was enough.  I could savor the flavor.  If you do happen to see them being sold in the store, I highly recommend that you test them out! 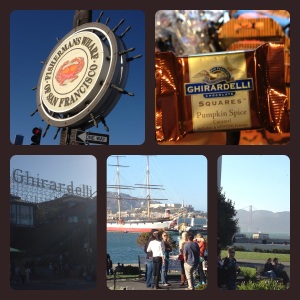 I swear, we LUCKED OUT with this weather.  People were walking around the bay in t-shirts and shorts, something I don’t usually consider possible in San Francisco.  I always imagine foggy and drizzly.  You can even spot the Golden Gate Bridge and Alcatraz above! 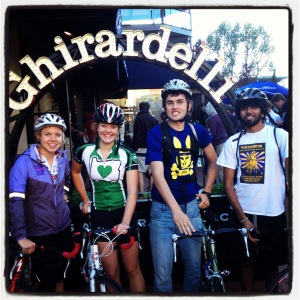 As you can see, we are looking our finest 😉  Well, one more picture couldn’t hurt, but after that it was back to the CalTrain and a nice 90 minute journey home.  So we didn’t get to SF as fast as I thought we would have, but without the two flat tires, combination of 15-30 minute detours, and an earlier start, we could have made it by 2:30.  Not too shabby of a ride for about 55+ miles.  The longest I have ever biked so far.  Stay tuned for more of Kaitlin’s Crazy Adventures 😉

“Living well and beautifully and justly are all one thing.”
– Socrates

2 thoughts on “From the Valley to the Bay”