Is anyone else surprised how Christmas is catching up on us?  I swear it seems like just yesterday I was finishing up finals and December had just begun.  Anyways, let’s get to business.  Thank you very much to Jenn at Peas and Crayons (an ah-MAZING website) for this WIAW link-up.

I apologize for the lack of recipes.  Being home for the holidays should mean that I am baking up a storm, but it’s quite the opposite.  I’ve created list upon list of tasks that I need to accomplish, usually leaving me exhausted and uninspired or simply out of time.  Starting a batch of cookies around 8, only to consume half of them and then not be able to fall asleep?  Yeah, I’ll pass.  Maybe tomorrow…

Let’s take a review of Tuesday, shall we.  Even though it was raining cats and dogs, I decided I would go running.  I also decided that instead of wearing a rain jacket/wind breaker, I would run in a sweatshirt, so I could pull off a “Rocky Balboa” look.  I certainly felt like a wrestler as I pounded the streets and then felt absolutely stupid as I trudged down the main street with a soaking sweatshirt weighing me down.

Back at home, I went straight for my yogurt (a mix of the two pictured above), frozen berries and cherries, and granola (Yay for living down the street from Sprouts Market).  I also had some of the Peppermint Mocha left from the other day’s BOGO deal.  It’s usually too chocolatey for me, so I simply add in some coffe and I’m good to go.

After a little break where I wrapped some gifts for my mom and did a few other chores around the house (I have a hard time sitting still), I took Bodie for a walk.

Now that all the humans are going green, eating organic, and getting healthy, I guess it’s about time our dogs do the same.  Although, I don’t think I have enough in my wallet to support even my own organic habits, let alone my dog.  He can stick to IAMs.

Back at home, I decided to take on the task of organizing more of our cupboards.  My dad told me he would pay for my services if I could make sense of the mess we created. 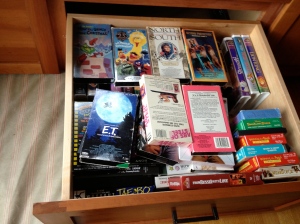 This was just one of the drawers full of VHS tapes, many of which I forgot we even owned.
I munched on some Trader Joe’s trail mix throughout the morning (more out of boredom), but it lacks photographic evidence.  Trust me, it was great. 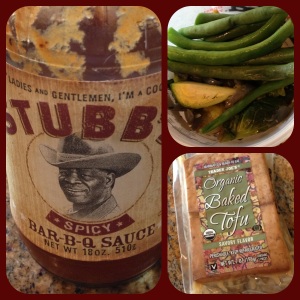 Lunch consisted of leftover brussels sprouts, green beans, avocado, some TJ tofu, and BBQ sauce.  Sort of hit the spot, but I knew I was going to eat out, so I wasn’t too disappointed.  Not very pretty so see below…

TIME FOR HOLIDAY CELEBRATION! The Grove was filled will people, decorations, a house where Santa was greeting people (old and young).

More browsing along the market and it wouldn’t be a trip unless I walked into Sur La Table.  Isn’t this Penguin martini shaker perfect?  I told my sister we would be celebrating Christmas Eve 007 style. Shaken, not stirred.

Dinner was pretty neat.  I got to test out a restuarant at The Grove called Fat Cow, which had a lot of upscale (and pricy) bistro-dinner options such as mac and cheese, hamburgers, and even some fish and chips. Of course Elf was playing in the bar section, so I could watch as I ate.  There was no sound but I practically know it by heart, so it wasn’t a problem 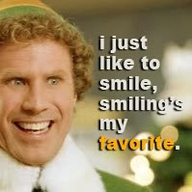 I ordered the sides of mac and brussels sprouts (which came with a soy-like glaze and hazlenuts…SO DELISH!) 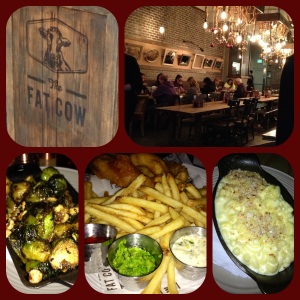 Isn’t the tree pretty with all the lights?  And there’s Santa with his reindeer 🙂 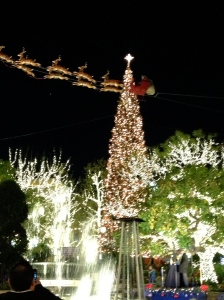 I drove back through the streets of L.A./Hollywood, utilizing a back-route past Barham (where I worked this summer), simply to avoid the evening traffic.  Because I ate so early, I was ready for something sweet to end the night.  I know, I said no sweets (at least during weeknights) but it happens. 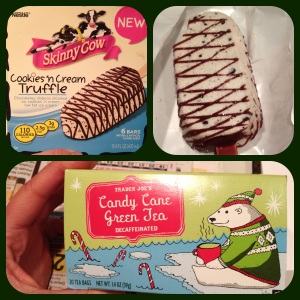 A few random things from the weekend/week.  So I tell myself every day to limit/reduce sugar.  Not sure that is exactly smart or a good plan to “diet” during the holidays, especially when I am forced to encounter situations such as these:

Desserts from Porto’s Bakery (at a Bridal Shower…of course the bride didn’t eat any of them so she could fit into her dress.  #issues) But it was worth it.

A delightful lunch out to Dish (a local favorite for breakfast, lunch, or dinner) with my grandparents.  Salmon burger with coleslaw and salad for me (hit the spot 🙂 ), eggs benedict for my grandpa (pictured) and the BLTA for my grandma.  All was divine! 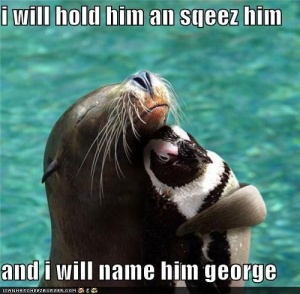 And for kicks and giggles, enjoy this article about the 10 Differences between New York and L.A.  It is absolutely hilarious. Two of my favorites are:

3. The standards of beauty in L.A. are wildly different from New York’s. L.A. is all about looking healthy, refreshed and athletic. Juice cleanses (aka starvation), hikes up Runyon Canyon (three times in one day), and a natural tan (secretly produced in a tanning bed). Meanwhile, New Yorkers want to look they’re on the verge of death 24/7. To achieve this look, they make sure their skin resembles that of a corpse and flaunt their malnourished figure proudly. “No, honey, this body was not brought to you by exercise and kale…”

8. In New York, you’re considered wealthy if you have a dishwasher in your apartment. In L.A., you’re rich if you live in a mansion.

I also just figured out (or was told about blends … blogger friends) and I think that constitutes everyone out there 🙂 I just wanted to give a big thanks to everyone for all the support (you are reading the blog after all, aren’t you) and wish everyone a safe and lovely Christmas and holiday season.  Enjoy!