Being a California girl pretty much means I live for spring and summer weather.  It’s pure bliss with the sun shining, the hint of warmer weather, and flowers everywhere.  The past few days were perfect examples of this and I couldn’t have asked for a better weekend.

Friday night I met up with Laura and we walked our way down to the Lower East Side to watch a comedy show put on by some mutual friends.  The show was pretty decent but am always surprised how much comedians have to focus on gender and sexual content to get laughs out of people.

After catching up with her friends, we made our way to the famous Katz’s Deli and feasted on some classic pastrami.  Now how’s that for a carbo-load meal?

The week had taken a toll on the both of us, so it was off to bed.  Ok, I may have watched a few things on Hulu but that’s because I’m in the middle of binge-watching Nashville and am hooked.

What better way to start Saturday than with a track workout? (Said no one ever…)  Just kidding – I absolutely loved it and honestly didn’t realize we had run almost 10 miles because it was so much fun running with my friends (or shall I say coaches?).  The people I hang out with ran cross country and track in college so running through Central Park or around a track has become a weekly no-brainer.

With a mile to and from the track, a 1/2 mile warmup and cool down, 10x800s with a lap recovery in between, we conquered close to 10 miles.  Not bad and definitely motivation for me to work towards a half marathon PR.

First stop after our track workout was Juicy Lucy – a smoothie/juice shop that our friend Carmen told us about.  I’m all about green juices and had been craving something citrusy to recover from the run.  I’ve read that pineapple is helpful combating inflammation and helping aid muscle recovery, so it was added into the mix. Make sure not to mix it up with Juicy Lucy – the burger bar and grill – and complete opposite health wise.

I don’t know about you but the more I workout, the more ravenous I become.  That’s probably pretty obvious, but yes, I become a snack monster.  A smoothie was not enough to satisfy me for the rest of the day, so we checked out the ever so popular Tompkin’s Square Bagels. 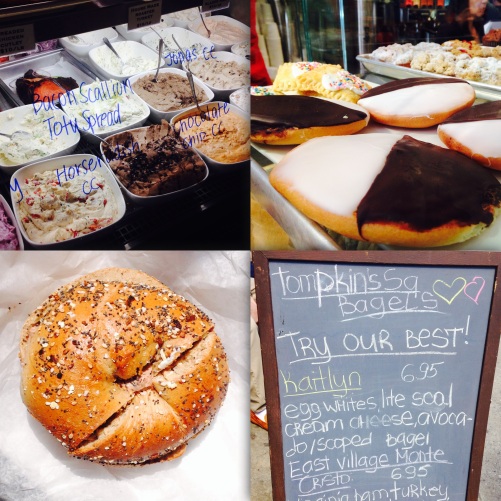 A cash only shop by Tompkin’s Square (if that wasn’t obvious), it’s known for it’s excellent bagels, variety of spreads, and delectable bagel sandwiches.  I opted for my new favorite – whole wheat everything – and topped it with chocolate chip cream cheese – because adding chocolate makes the world better.  Although, I really should have gone for the “Kaitlyn” just because it was named after me.

Yes, this is still part of my recovery meal because I had missed out on my daily dose of coffee and felt a frozen dirty chai from The Bean would be worthwhile.  Yes, indeed, it was a worthy choice 🙂

After filling up on sufficient snacks, it was time to veg out and recover from the morning’s run.  A few episodes of Nashville later, Laura and James came over to procrastinate and we made huevos rancheros for dinner.  I left them at the apartment and went off with a few coworkers to attend a birthday party in Brooklyn.  Oh the stories that happen after 10pm. 😉  I’ll leave it with three D’s – drinks, dancing, and diners.

Getting home at 3:30am didn’t exactly bode well for my sleep patterns, but at least I’ve got some time to sleep in later this week.  I wanted to take a spin class by a fellow blogger but when I saw the sub-instructor mounting the bike, I made a bee-line for the door and found myself picking up Stumptown cold brew and a bagel instead.  Both were consumed in the beauty of a spring morning in Madison Square Park, one of my favorite places in the city.

In the early afternoon I caught up with my Claremont running buddies for a long run up to and around Central Park where we had to push past plenty of tourists and finished with close to 10 miles.  Boy, I’ve surprised myself with how I’ve managed the past couple days but I think my legs will not be so pleased in the next couple days to come.  I’ll have to make sure to stretch, ice, and foam roll to prevent shin splints or other fun aches and pains.  But I wouldn’t have changed anything because running with my friends absolutely made my weekend.

On another note, my friend Mia ran her first marathon today and finished in 3:31, subsequently qualifying for Boston 2015!  I’m so proud of her!

“Limitations live only in our minds.  But if we use our imaginations, our possibilities become limitless.” – Jamie Paolinetti

9 thoughts on “We Run the City in Spring”