“If you are losing faith in human nature, go out and watch a marathon,” – Kathrine Switzer (the 1st woman to run the Boston Marathon)

That quote may be used in pretty much any marathon story and running scenario, but I swear, it’s spot on.  This past Sunday was the third time I have watched a marathon, the New York City Marathon nonetheless, and it has left me inspired and often speechless.  There are people who have been runners for years and others just started.  Some people are trying to outrun their past or present and are training for a brighter future.  There are some who sign up on a whim and others who have had this as a bucket list item for years and years.  Whatever it may be, the time and effort that thousands of people put into training and the accumulation of all of this on race day is truly amazing.

This fun little article explains How New York City Made the Modern Marathon, which was started back in 1970 by Fred Lebow and travels through all five of New York’s boroughs.  Starting down in Staten Island (one of the few times you really need to go to Staten Island), the course heads over the grueling Verrazano-Narrows Bridge, passes through Brooklyn and Queens before hitting Manhattan at the sixteen-mile mark.  Once in Manhattan, runners travel up 5th ave, into the Bronx before heading back into Manhattan, down 5th ave, into Central Park and swinging up to the Tavern on the Green. 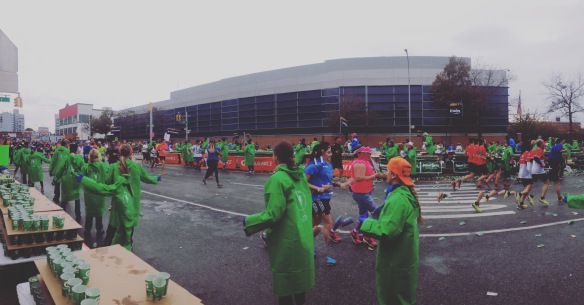 But let’s start at the begining of the weekend.  When we left off last week, I was heading into the weekend, enjoying the sunshine, and prepping to volunteer at Sunday’s race.  On Saturday my friend Sam and I decided to check out the marathon expo at the Javitt’s Center and I’m so glad that we did.  It was stuffed to the brim with runners, families, tourists, and so.much.running gear.  There were GUs, and shoes, and backpacks, and all sorts of swag to purchase.  I was eyeing the jackets and backpacks but have a superstition about wearing something from a race that I didn’t run or haven’t raced yet.   I did end up splurging on a New Balance jacket that said “RUN NYC 2015” but it wasn’t exactly marathon connected, so I didn’t feel too bad.  After all, I have “run” in NYC during 2015.

On Saturday night, I stayed with some friends over in Brooklyn, right around mile 8 and have decided if there were to ever be another place to live (outside of Manhattan) that might be the place.  It’s so cute and quaint, and definitely emerging as a trendy part of Brooklyn – just not hipster, which I don’t exactly jive with.  We walked around and watched the trick-or-treaters, we grabbed dinner at a local German beer garden (those egg noodles…absurdly delicious), and called it a night.

Sunday morning, we were up bright and early at 5am (thank you daylight savings for that extra hour), grabbed some coffee and were off to the mile 7 water station.

^^ Aren’t we impressive?  Gatorade and Poland Springs water cups for dayyyyyyys.  All with logos facing out of course. 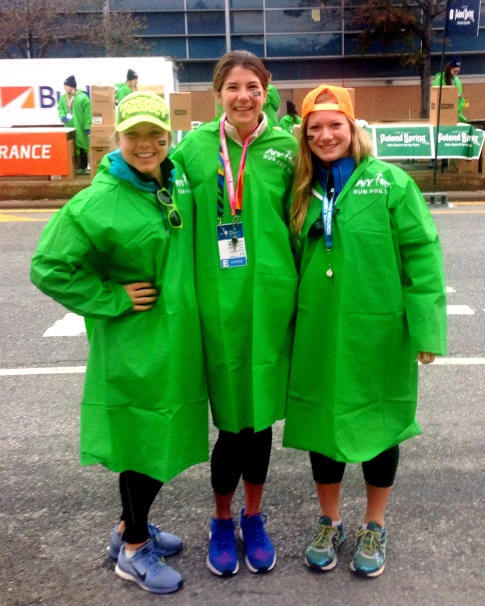 ^^ Hanging with a couple NP buddies, all dressed in glorious green ponchos.  So attractive, I know.

Our section was extremely efficient and so we happened to have a good hour between setting up and when the elites were planning to run through.  The various waves start around 8:30am and go off in increments until the last wave at 11am.  To think that you may have gotten to Staten Island around 6:30/7 and not start running until 11! Oh I know the feeling oh too well as it happened to us in Sweden…

Anyways, watching the wheelchairs fly by and elites glide through was something else.  They don’t generally grab anything from our stations since they have their own personal hydration crews, but it’s 100% time to focus when the rest of the runners start to stampede through.  Now I have never run a marathon, but I do believe that volunteering at a race drains your energy just as much as running a race or at least a half marathon.  You are standing on your legs for hours on end, cheering people on (tip – put your name on your shirt), making sure all the runners know which beverage you are handing out (most were confused with Gatorade vs. water and so this resulted in us yelling “water” for three hours straight), and clearing the way so runners don’t trip on fallen cups.

Many of us were using the New York Marathon phone app that enables you to track up to 10 runners, see their splits, and even follow them along the route in real-time!  Having all the November Project people run through was an absolute blast and I’m so glad we got to spot a few amongst the masses.  I seriously am in such awe of all the runners and what they do and things they sacrifice to be there.  There are tears and struggles along the way, but the end result and accomplishment is beyond amazing. 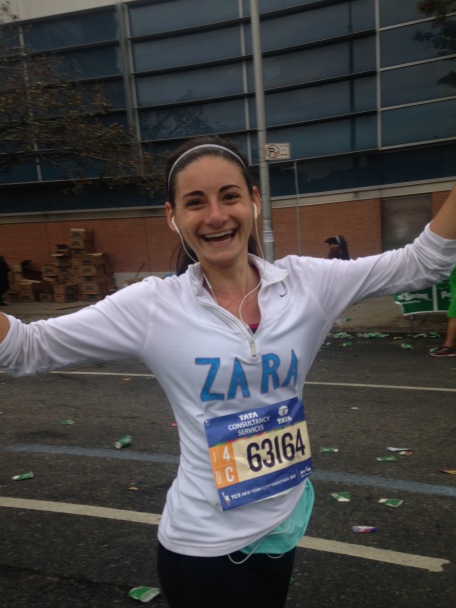 ^^ Managed to see my friend Zara as she completed her first marathon! Way to go Zara!!! Goodness, the energy she had at mile 7 was amazing!  Can I smile like that in more of my races?  I always have too much of a serious look (#RBF)

Since we were towards the beginning of the race, we were able to start cleaning up relatively early in the afternoon.  This really wasn’t the most enjoyable party, but we plugged along, listening to music and checking in on our friends through the NYCM app.  Seriously – the live route tracker was SO COOL.  Creepy in a way how technology has evolved, but cool. 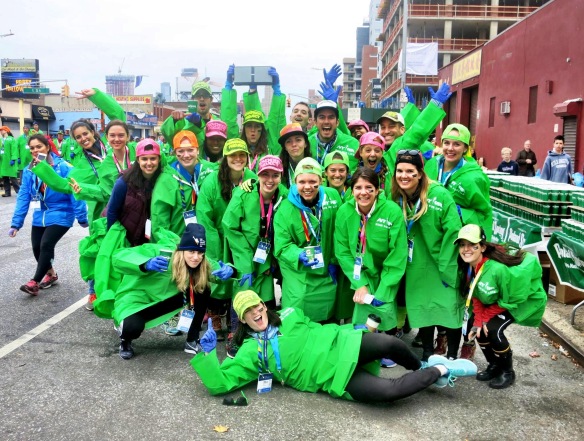 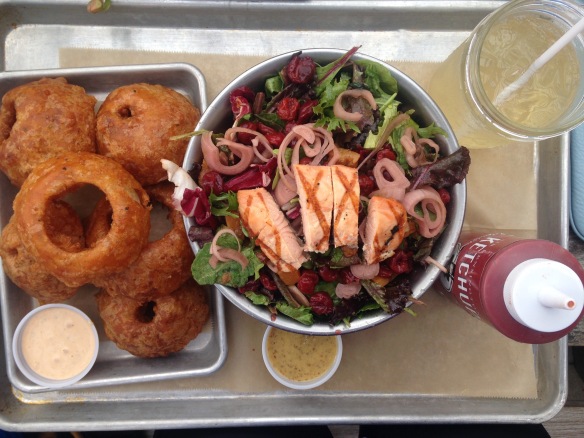 Once we finished, we were all pretty much famished and split off in different directions (most people heading back to lovely Manhattan) to rest, recover, inhale food, and then meet up for a celebration later that night.  Our group decided on a Whole Foods restaurant nearby, with this lovely array of items as my balanced selection. 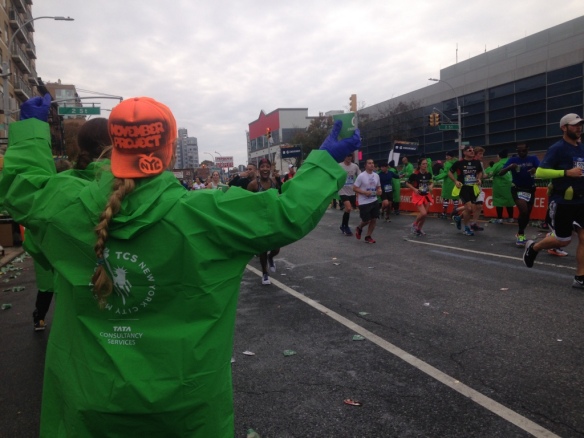 I am somewhat at a loss of what else to say about the marathon.  Having never run one, I don’t know the physical, mental, and emotional hurdles that you put yourself through during training and during the race.  I do know that I am so impressed by those who ran yesterday or have ever ran one and that I have a goal of running New York and proving to myself that I can do it.  For me, it’s about having a goal, living in the moment, enjoying this city that I have grown to love, as well as earning that sense of accomplishment.  I know it’s a ways away, but I’m excited to train smart, put in the miles, and join the club.  Now just remind me that I said all of this when I start to complain about aches and pains 😉