I guess the title of this post could pretty much sum up my weekend and that’s fine by me.  Actually, I started to realize that most of my posts and pictures have been dominated by November Project workouts and shenanigans, but I am perfectly content with that.  To me, my ideal day would consist of running with good people, brunching or lunching up a storm, and a hike in the mountains or day at the beach.  So, while this chilly February weather won’t exactly allow me to do the latter, I am still able to fill my free time with workouts and awesome company.

They say that if you work hard enough, you will find what you are looking for.  That or does the saying go, when you stop actively looking, things work out?  Honestly I despise those cliches, mostly because people use them to encourage us single folks that things work out.  People, times change and I’m quite enjoying being 23 and single.  But, if it’s in the case of friends and work, then yes, I have to thank my lucky stars that I’ve found a group of people who love to work out and have the right mentality – work hard, play hard.

I really should start making note of the change in temperature, almost like a personal almanac.  Because, who would have thought that I, a California girl who quivered at the thought of sub-50 temps, would brave the elements in 15F with 0F wind chill?  Well, I guess when it’s in the name of fitness and friends, I’m your gal.  But really, waking up Friday to that sort of temperature just made me looking forward to spring that much more.

Friday’s workout was practically in my backyard in Madison Square Park.  We went for about 30-35 minutes, alternating pushups, laps around the park, and dips on some park benches.  Of course, a workout isn’t complete without a few funky pictures and well, when you give us a snowman, we will definitely caption it with some “Frozen” quote.

The rest of the day was uneventful and the lack of sleep from the week left me watching “Hart of Dixie” in my bed and passed out by 10:15pm.  Friday night rager.

Saturday called for a long(ish) run, starting at New York Road Runner.  Both of our co-leaders, along with a few other NP members, happen to work at NYRR, so we are quite lucky in the sense that we always have a reason to meet up and run or race.  (one of our hashtags does so happen to be #raceeverything…yes, I may overuse hashtags but #sorryimnotsorry)

Coach John is leading weekly long runs for those prepping for the upcoming NYC Half in March and while I’m not racing in March, I decided to tag along.  We ran seven miles of the course, which took us out and around Central Park.  I started out with some of the folks, but we all started to slowly pace into our own groups.  What’s awesome about running groups is that there are so many people running different paces, that you are bound to find someone to run with or someone to help push you to run harder and faster.

With a mile to the subway, 7.5 around the park, and a mile or so home, I’d call it a successful morning.  We spent quite awhile stretching back at NYRR and while I didn’t end up sticking around for brunch (although I did have some fear of missing out), I jogged to the local Juice Press with a few friends to pick up our free Saturday morning juice.

For those of you newbies like myself, Juice Press is offering free juice (a whopping $10 savings!) every Saturday for people who post an Instagram picture of them running, or something of the sort, using the above hash tags.  I may have missed out two weeks in a row due to poor timing and strict employees who stop the promotion right at 12pm.  Not cool. 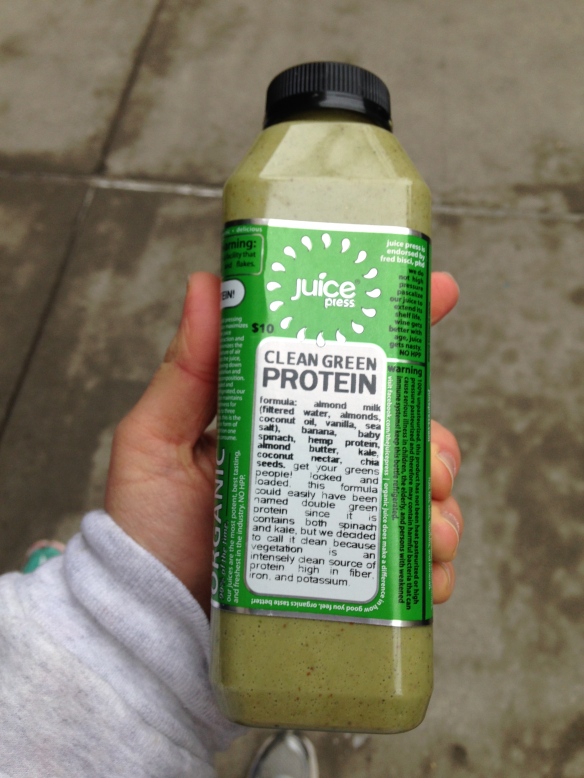 But, this week, with the help of my NP buddies, we made it right on time and made use of the free samples fridge to test out our options.  Of course each of us probably sampled 10 juices and then all went with the Mint Chip smoothie or Clean Green Protein.   Had I not been starving, I would have gone with the  Doctor Green Juice, but was looking for something with more substance.  Maybe I’ll try that one next week.

The rest of the day was spent catching up on various television shows and making a list of errands, recipes, and crafts for the remainder of the weekend.  Sometimes it occurs to me that I spend way too much time on the computer, watching TV, staring at the bright screen, and not enough time reading or educating myself.  Oh well.

Yes, we do more than just sit around and watch movies.  Actually, we have gotten much better about going out once every couple of weeks (or once a week) and have tried hard to move past the one or two bars we always go to, just out of convenience.  On Saturday, we tested out the Hair of the Dog and let’s just say it’s quite a popular joint.  As long as they’ve got good music (preferably something uber upbeat…like this song from the Great Gatsby) and not too many people pushing you around, it’s a worthy location.

I’m pretty sure neither Hope, nor Lindsay had seen me dance so much than they did to that song.  I don’t always dance, but when you give me some killer music, it’s game time. 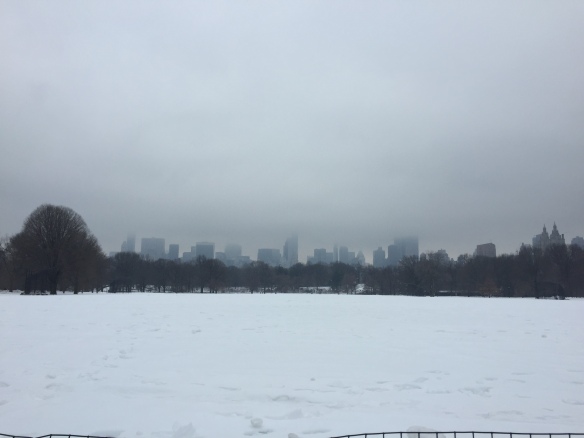 >> Soooo, I guess snow doesn’t look that bad on the city <<
Photo creds to Lindsay

Sunday was back to my buds from November Project with some speed work and hill training.  We all volunteered to put our bodies through 8 hill repeats, the equivalent of 2 miles (w/ ~3 miles recovery) and while it was tough, it was pretty fun. 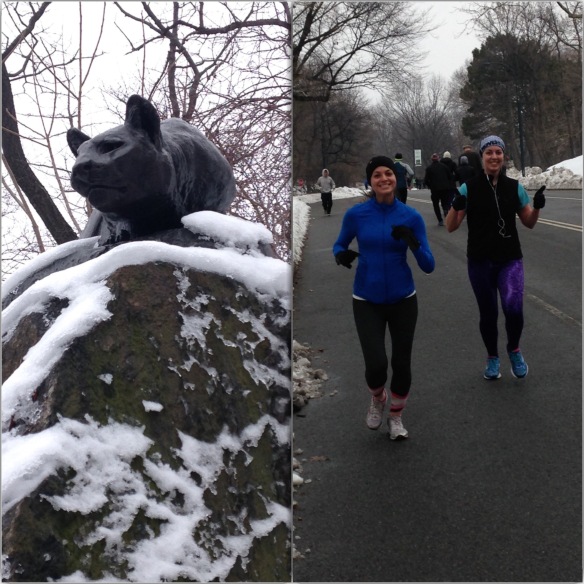 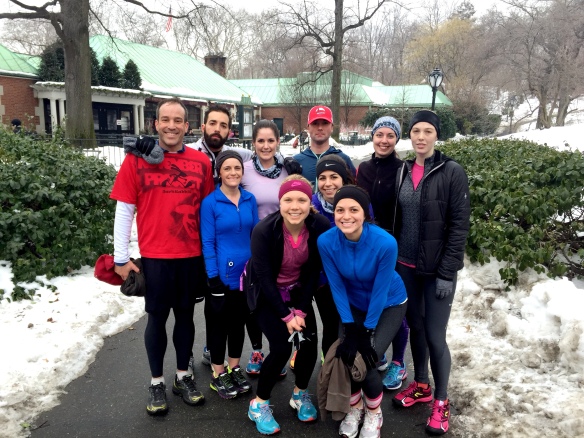 As a few people went out to brunch at a diner, I met up with Lindsay to grab a scone from Alice’s Tea Cup.  There may have been a slight feeling of FOMO again and I’m sure you are shocked that I wouldn’t jump at the opportunity to eat at a diner.  Usually, that’s my jam, but I had been thinking (maybe dreaming) of scones for the past two days and so a different sort of jam was on my mind.  Pun intended.

It’s funny because some of my friends outside of NP feel like it’s just “my thing” and they don’t want to interfere.  But that’s not the point of November Project.  Sure, we tend to act like a club or dare I say cult?  No, no, no.  We are a group of people dedicated to working out and having fun.  To us, the more the merrier!  So, find a tribe near you and #justshowup 🙂

Lunchtime has become a forgotten time.  Not too long ago it was the best part of the day.  Heck, I even used it as an answer for my Tournament of Roses Parade Court interview.  If I really wanted the position, I should have used some answer like “my peer counseling class”.  But, I guess I didn’t think that through and honestly, the best part of my days were lunch because I could hang out with my friends. Needless to say they did not ask me back.

All through elementary school, junior high, and high school were had at least 30 mandatory minutes where we were supposed to eat, catch, up and play without the stress of homework or studies.  Often times people (cough cough this teacher’s pet.  That’s right, I admit it) would use the break to cram for a test or finish up homework, but most of the time, it was a welcome escape from the stress of school.

Through experience, I’ve realized the lunch hour has disappeared from the workforce. People no longer socialize but rather grab takeout or a quick salad and hustle back up to their desks where they stare at computer screens.  Sure, I’ve been guilty of this, especially during March Madness when I felt overwhelmed by reporting and clients demanding this and that.

What I came to realize is that I was actually less productive because I had skipped out on time away from the computer screen, skipped out on much needed social interaction, and skipped out on the ability to breath and take a break.  We can’t always be moving like the energizer bunny (although I try really hard to).  I also end up wondering what I ate for lunch since sitting in front of my computer distracts me from the food itself.

So in a moment of spontaneity I left the confines of the office and ventured into the humid air of New York. Even if I didn’t get the chance to sit down and eat outside, a brisk walk would do the body and mind good and I was on a hunt for some quality chow.

Enter Dig Inn, a higher end healthy salad bar that reminded me of something I would find in Santa Monica, California.

We believe everyone deserves to eat well, even on a budget. So we’re democratizing the farm-to-table movement by offering ridiculously good food at a reasonable price.

That means sourcing local, seasonal ingredients – not just because they are ‘local’ – but because fresh, healthy ingredients taste best. That means you’ll find grills, flames, and all the other good stuff people use to cook real food behind our counters. If there’s a steak on your salad, we’re grilling it ourselves, on the spot.

We’re here to change the way people eat, and things are off to a great start.

Here we are with a lovely green beverage.  Honestly I was a little taken aback at the price, but then put it in perspective as this is NYC.  Also, with that much produce, $8.50 made more sense. 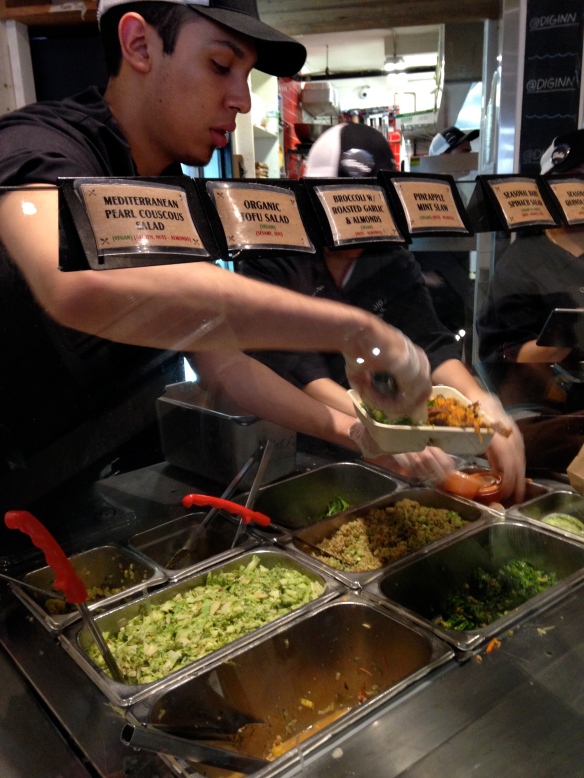 I guess you could say it’s a fresh take on the Subway station.  As you enter the store, you are presented with a large blackboard menu listing the day’s options.  Since it is a hotspot during the workweek, I suggest selecting your meal quickly.  Maybe bring a friend and as they stand in line, you can survey your options.

I ended up selecting a salmon salad over spinach, kale + apple salad, and smashed sweet potatoes.  All for about $7.35, leaving me full, focused, and ready for the rest of the day. 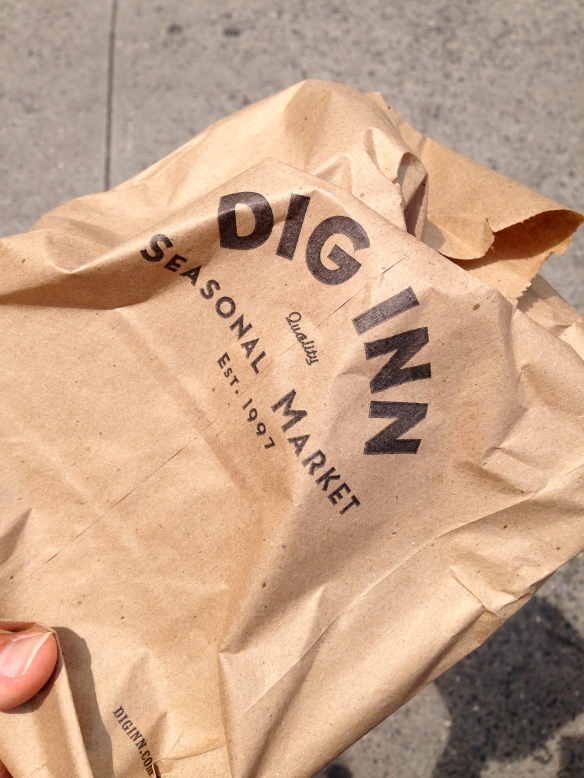 The only downside to venturing into the streets of New York is that I’m usually on my own.  It’s tough to gather up my coworkers when all of our schedules differ.  But for now, I’ll balance our cafeteria lunches with my quick jaunts outside the confines of work to stretch my legs and expand my horizon in the big city.

Anyone else thinking the same thing?  In this case this post isn’t about booze, but rather my affixation with other liquid beverages that may or may not be considered part of the healthy bandwagon.  I admit, I fell to the trend of kombucha.  It was good for awhile, but the taste and high price wore off after awhile. 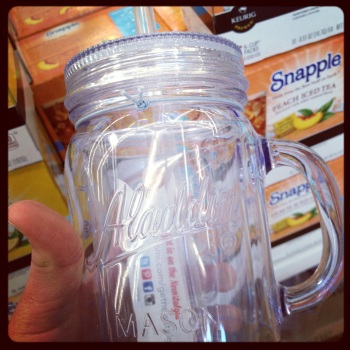 END_OF_DOCUMENT_TOKEN_TO_BE_REPLACED

© Kaitlin Fuelling and California Endless Summer, 2016. Unauthorized use and/or duplication of this material without express and written permission from this site’s author and/or owner is strictly prohibited. Excerpts and links may be used, provided that full and clear credit is given to Kaitlin Fuelling and California Endless Summer with appropriate and specific direction to the original content.
%d bloggers like this: