What I love about my blog is that these posts can go in every different direction that I chose.  As a result, it follows my stream of consciousness and love for sharing (almost) every single thing that crosses my path in the big city.   There are good times and there will be bad times.  Throughout everything, we make memories and that’s what matters – living life to the fullest in our own unique ways.

The change in seasons will never get old with this California girl.  I may not be able to stop and smell the roses, but I certainly have to remind myself to slow down and absorb the beauty in the corners of this crowded city. 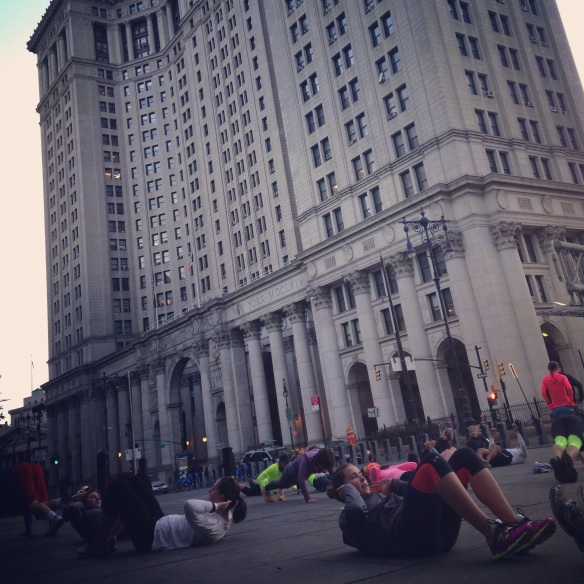 So here’s the deal. I ran a half marathon in May and got a PR, but also gave myself plantar facitis.  I’m not even sure if one can say they “gave” themself an injury like that.  I guess I caused it?  Anyways, running has been off the books for awhile.

At first I was in denial but I have since come to terms with it and with the help of spinning, hot yoga, and painful massaging, I plan to rehab it back into business. For so long my identity was tied to running and I felt lost without it.  What’s great about November Project is that yes, they are mostly built up of runners, but there are plenty who are plagued with injuries such as mine and so we work out in other ways together.

On Monday I started talking about the Christmas holidays but let’s backtrack a little shall we?  It’s never too early to indulge in some Thanksgiving eats and that’s just what my housemates and I did over the weekend.  We each contributed one of our favorite dishes – Hope’s turkey and fantastic caramel apple pie, my cranberry sauce (healthified of course), Lindsay’s epic mashed potatoes, and Gaia’s superb wine selection.

Can you believe it’s almost been a full month since the New York marathon (or beginning of November)?  The Monday following the race, I stopped by the upper west side JackRabbit store in order to see Meb Keflezighi (4th place at the NYM and 1st last year in Boston!)  Turns out a good deal of New York thought this would be a good idea too and the line turned out to be a 90 minute adventure.  Sadly my meager lunch hour did allow for this but I did get to give him a solid high-five upon his arrival to the store. 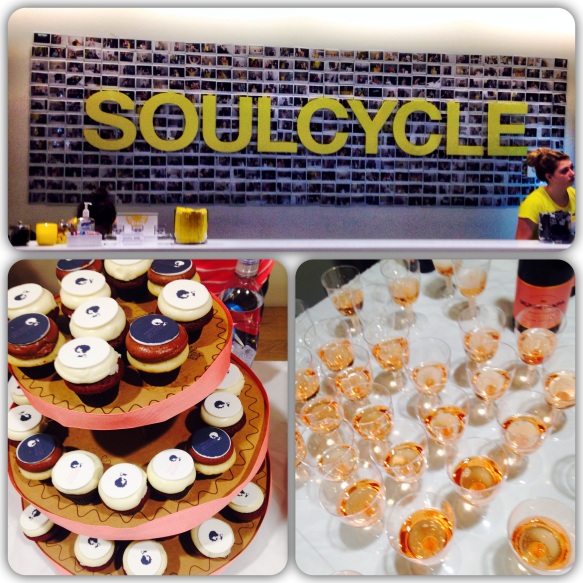 I belong to the Advertising Women of New York and was invited a few weeks back to a special Soul Cycle class.  What a better way to network than by sweating and celebrating with some bubbly?

I told my mom that I will be celebrating every future holiday by treating myself to a spin class and she just laughed.  Ok, she may have been laughing at the fact that I planned out my birthday already…when it’s 6 months away.  I mean, never to early to plan, right?

Just a little bit of Broadway with my dad.  It’s quite the treat to have family in town because not only do they like to wander Central Park with me, but they also like to see a musical or two and test out some new eateries 🙂

I loved listening to Idina Menzel’s voice (Frozen fans anyone?) but honestly felt the acting was a little forced and awkward at times.  However, I adored the message behind If/Then – something along the lines of living in the moment and not regretting your decisions.

Putting an egg on a burger = genius and never fails. 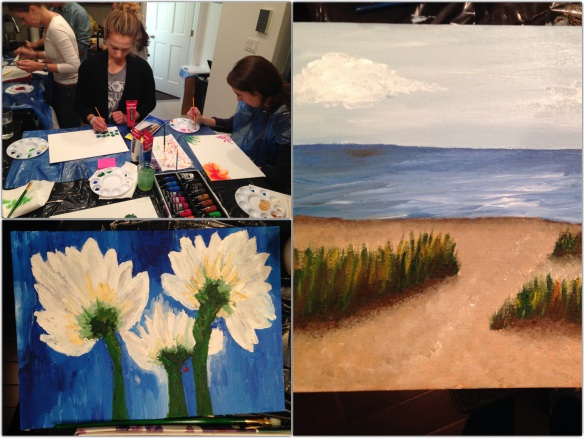 ^^ The flowers would be mine and the gorgeous beach scene would be Lindsay’s.

Have you heard of those “Wine & Paint” classes?  Well, my friend Marnie had the most brilliant idea to host one of our own?  We have a group of friends that gets together every Wednesday for dinner, but this time we decided to spend a Saturday afternoon painting various canvases for the bare walls of her Brooklyn apartment.  Just a group of friends getting together and painting all sorts of scenes definitely is my idea of fun.

Here we are at Radio City Music Hall for the filming of Michael Buble’s Christmas Special.  What we expected and what we saw were two very different productions, but just as festive and exciting.  What we had expected was the actual show, however we were the crowd-fillers for the filming of the show, which will air in a couple of weeks.  Thus, we were invited to endure multiple takes, a terrible crowd comedian (to get you pumped up), and Michael Buble’s amazing off-screen personality.  All in all, a blast and another reminder that New York really does have it all!

“One day in retrospect the years of struggle will strike you as the most beautiful.”
– Sigmund Freud

© Kaitlin Fuelling and California Endless Summer, 2016. Unauthorized use and/or duplication of this material without express and written permission from this site’s author and/or owner is strictly prohibited. Excerpts and links may be used, provided that full and clear credit is given to Kaitlin Fuelling and California Endless Summer with appropriate and specific direction to the original content.
%d bloggers like this: